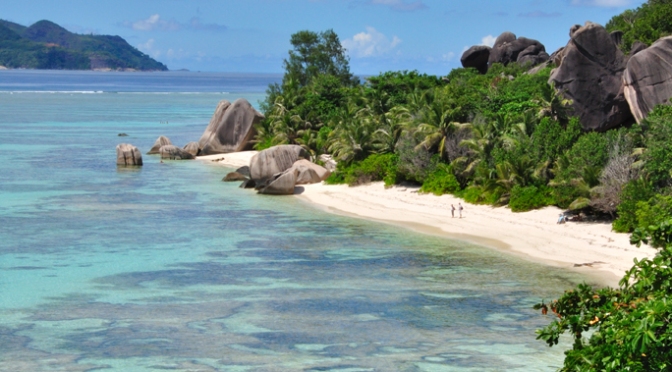 If you want a place that will strip away everything but the essentials, the island of La Digue in the Seychelles offers the good things: pristine beaches, crystal waters, good food and perfect weather. Michelle Jones staked her claim

LA Digue is described by locals as the island that time forgot. I’d describe it as heaven on earth – and the best little island in the Indian Ocean.

The inhabitants are called Diguois. They first arrived in 1798, exiled from Bourbon, France, for taking part in a political rebellion there. They were supposed to be sent to the East Indies, but bribed the captain to ship them to Seychelles instead where many had relatives. Good move.

That’s because as a tropical island La Digue has it all: it’s the right size, has stunning beaches and natural beauty, crystal waters, restaurants (not too many), diverse accommodation, friendly people – and almost no cars.

The sun shines almost every day and temperatures range between 24°C and 32°C – no jerseys here. It’s not too big, and not too small, and about 5km long by 3km wide. You trundle along by bicycle to explore.

There are several great beaches to choose from where huge granite boulders loom over pristine, white sands, with towering palm trees edging clear water in shades ranging from turquoise to deep blue.

La Digue is also a bit isolated, but still accessible. There is no airport, or natural harbour, the island protected by coral reef. Streets quietly hum to the rhythm of local life: the surf flopping far away, a warm breeze, a melody of ox-carts and bicycles.

How does one while away the time here? This is a tropical island, after all.

You go for long walks on the magnificent beaches, snooze in the sun with a book, poolside or on the sand, and cycle around. Enjoy the locally brewed Seybrew beer and plentiful seafood, and munch on crisp, salty banana chips.

At night only the plump of the waves and the cries of birds can be heard, along with the faint hum of music and voices close to the beach.

Here you can still take the time to watch the massive night sky, so clear that it’s difficult to tell where a silvered sky meets a quiet, lapping ocean.

There aren’t many restaurants on the island which aren’t linked to hotels.

Most spots advertise their menus on the roadside, often featuring traditional dishes including fruit-bat curry and octopus salad. For those keen to do self-catering while on the island, Gregoire’s is the best-stocked supermarket and has an adjacent pizza spot.

Cycling is the best way to get around. Bicycles can be rented from a number of hire shops near the jetty for about SR100 (R82) per day while large hotels will provide them. Make sure to take plenty of water to drink and slap on the sunscreen. Cycle along the island’s quiet roads and stop over at every curio shop, fruit stand or beckoning blue beach you pass.

It is easy to see why this is one of the most photographed beaches in the world and was named the world’s top beach by National Geographic. With it’s pink sand, towering granite boulders and tall palms, Source d’Argent is breathtaking. The beach is fairly busy, filled with tourists sunning themselves and frolicking in the waves.

Stalls set up among the trees sell fresh fruit, coconut drinks and homemade jewellery. The water, warm and inviting, is crystal clear and fish swim around your legs.

To get to Source d’Argent, you’ll need first to enter this estate with an entrance fee of SR100. You can peek at an ox turning the grinding wheel which removes oil from coconuts to make copra. There is a pen filled with giant Aldabra tortoises – about 50 of them, aged between 30 and 90 years. Stroll by the fragrant vanilla plantation, where after ripening and months of drying, the essence is extracted and sold on La Digue’s road side.

This free reserve has been established as a safe space for the black paradise flycatcher, an endangered bird endemic to the Seychelles. Paths lead around the forest of tall trees, mainly takamaka and badamier. Listen out for the call of the birds and watch out for the males’ distinctive blue bills and long tails.

If you’re feeling sprightly, consider walking to Nid d’Aigles which, at about 333m, is the highest point on La Digue. You’ll pass Château St Cloud, an old plantation house built during Napoleon’s rule which has now been renovated into a small hotel. We made it as far as the Belle Vue Café, about 20 minutes from the top, and refreshed ourselves with fruit smoothies before admitting defeat and making our way down. The views even from there are superb.

You’ll snatch a glimpse of Praslin, the second-biggest Seychelles island, and a number of other smaller islands. The walk takes about two hours, up and down.

If you pass a sign for a local eatery advertising fruit-bat curry, don’t hesitate. The local cuisine, usually featuring fresh fish, is delicious, if a little unfamiliar, and can be extremely affordable. We popped into Gala Takeaway, close to Le Veuve Reserve, and two meals, two drinks and a serving of banana chips came to less than SR100. We ordered octopus salad and a curry dish which turned out to be made of chicken necks. Make sure to try breadfruit which, local legend has it, will ensure you return to the Seychelles.

Air Seychelles flies from Johannesburg to Mahé three times a week on Tuesdays, Thursdays and Sundays. From Mahé take the Cat Cocos ferry to La Digue. There are also a number of private boats which can be hired for the hour-long journey between the islands. No visa required to visit the Seychelles.

Arrive by ferry at the jetty in La Passe, buzzing with locals and tourists around an information centre, shops, police station, post office and bank.

Transportation on the island, which is about 6km long and 3km wide, is mostly by ox-cart and bicycle.

A small road bisects La Digue from west to east from La Passe. Accommodation options are dotted along the road.

Temperatures vary between 24C and 32C and the nights do not stray too far from that. The humidity can be intense and rainfall, usually between October and March, is a welcome relief. The currency is the Seychellois Rupee and one is equal to about 80c. English, French and Creole are spoken.

WE stayed for two nights at Le Domaine de L’Orangeraie on Anse Severe. There is a restaurant and bar area overlooking the sea, complete with an infinity pool. The resort’s 55 villas, each decorated in a zen style, are set in a tropical garden. We stayed in a Villa de Charme Élégance which was the epitome of luxury.

The private room, surrounded by tall trees, included a balcony and outdoor bathroom with open air bath, shower and Jacuzzi.

The resort’s spa, Eden Rock, offers massages, hairdressing, and manicures and pedicures using their own range of products.

There are two restaurants, serving international fare and local Creole specialities including fresh fish. The highlights of every meal included the newly caught fish, the most memorable being the red snapper, and the vast array of fruit. In the Santosha restaurant, chefs prepare the buffet meals – made from the catch of the day – as you watch. The Le Combava restaurant serves à la carte.

Activities on offer include boat trips and snorkelling excursions. Bicycles are provided free of charge throughout your stay.

* Another night on La Digue was spent at the Patatran Village Hotel on the northern tip of the island. Situated on Anse Patate, the rooms and restaurants offer a stunning view of white sand, blue water and plant life. Its two restaurants offer a choice of Diguoise and Creole cuisine.

2 thoughts on “The best little island in the indian ocean”